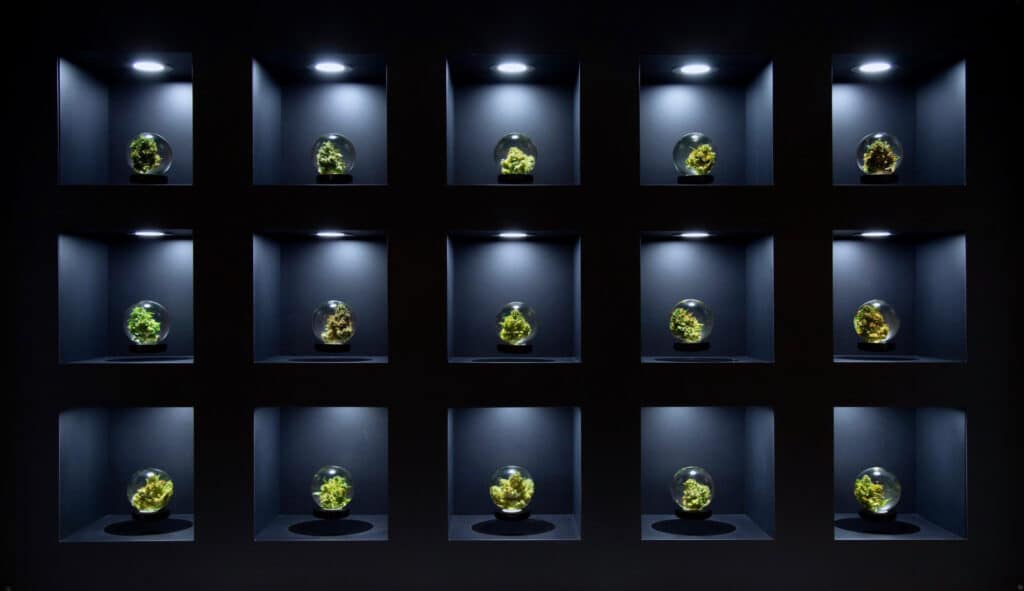 Retail communication: How art can build your brand’s identity

As stoned artists have known since the dawn of the dank, nothing unlocks your creative potential like a good old-fashioned toke. But cannabis isn’t just a means to artistic ends. The booming new green industry has created unique opportunities for visual artists to showcase their work.

As competition in cannabis grows ever fiercer, great art can be just what a brand needs to set itself apart. Take the old-school Cali brand Califari: thanks to regular partnerships with their large network of artists, the brand has one of the most distinctive aesthetics in the industry. Each strain features a different artist, which supposedly gives consumers a visual preview of the experience they can expect from the cultivar. As their website boldly declares, “We are on a mission to Artify the cannabis world — we’re tired of bare dispensary walls and boring packaging.”

Dispensary design offers boundless potential for artistic collaborations. Last November, the Toronto dispensary PlugCann6is partnered with multimedia artist Amer SM to give their store a one-of-a-kind look. Pairing a sleek logo design with indoor and outdoor artwork, Amer SM gave the franchise a clear artistic direction. He’s also positioning the dispensary at the heart of a deeper conversation about the power of the plant: his paintings show feuding world leaders conducting foreign affairs over joints, art which demonstrates the subversive power of cannabis. Through design, PlugCann6is communicates that what they are selling is more than just another product.

When it comes to using cannabis as creative fuel, John Johnson has a unique and direct approach. After a lifetime of consuming cannabis for inspiration, the sculptor has come to see the plant as his muse. “One of my friends was a grower, and I was helping him trim,” says Johnson, “and a lightbulb just went off.” Just as a perfectly iced cake can be almost too beautiful to cut into, Johnson saw that the beauty of the bud should be preserved for its adoring public. “I love fresh cannabis flower,” he says, “but not many people get to see it the way it looks on the plant. I want to highlight that so people can see it in the form of art.”

Johnson began his career as a sculptor after working in a high-end LA art gallery, where he realized the sculptures they were selling would be well within his ability to produce. “I noticed projects they were doing and said, I can do sculptures similar to this,” he says. “Doing those commission sculptures allowed me to work with new materials all the time—getting in my ten thousand hours, if you will.”

But nothing he had done before could have prepared him for the difficulty of using resin to capture cannabis flower in full bloom, a process of trial and error that required him to be as meticulous as a chemist. His sculptures showcase perfectly-preserved buds that appear to have been effortlessly enclosed in glistening transparent globes, but in reality, they are the result of six months of frustrating experimentation.

Since the material “does not play well with moisture,” either the resin would cloud or bubble or the buds would burn or discolor. “To get it just right took a lot of experimenting. It was literally blood, sweat, and tears—a lot of fun, but maddening,” he says. All the while, money was running out, and his wife was pregnant with their first child—the pressure was on. But his gamble paid off when he found the right formula, and the buds could finally be displayed in all their glory. “I’ve always loved cannabis, but growing up in the Midwest it got a bad rap. To have a way to celebrate in an art form removes the stigma,”  says Johnson. “It gave me the drive to keep going.”

Now, four years in, he has a number of partnerships with dispensaries and design companies, as well as a star-studded roster of clients. Johnson has sculpted a cannabis cane for Snoop Dog and a bolo tie for Willie Nelson, and he dreams of making a bowling ball for Wiz Khalifa that would make the Dude weep with envy. His commissions for dispensaries range from elaborate chandeliers to a magnetic strain display cabinet where buds hover in mid air. Having created a hundred-piece chandelier and a levitating cannabis cabinet, Johnson is confident that he can handle any dispensary’s dreams. “I’m looking for opportunities to make large-scale works,” he says.

For Stacey Santoro, whose company EIE Greencloud provides experiential interiors for the cannabis space, aesthetic excellence is always the result of including artists in the collaboration between dispensary owner and designer. As she always tells her clients, a standout piece of art can tie the whole design together.

Santoro has seen collaborations with artists bring dispensaries into a more expansive way of thinking about their role in the community. On a recent trip to California she saw a dispensary that also operated as an art gallery, and was struck by how well these seemingly separate goals served one another. “You can see these two experiences cohabitating—the customer transaction with a really cool visual,” she says. “It really is a win-win all around.” Santoro points out that art has the potential to convey the deeper values of the dispensary, since the art is a direct line of communication to customers. “You want to have these stoppable, awe-inspiring moments, but the owner also wants to tell a story,” says Santoro. “What a neat way to put that together.”

With more and more dispensaries coming onto the scene, Santoro cautions potential license holders not to overlook the importance of having a distinct aesthetic. “When we talk about the art and moments of differentiation, I don’t think it’s to be taken lightly,” she says. “It takes a lot of time and money to open a store, and the last thing you want is to do all that and for people to say, ‘eh.’ That’s not good.” She also sees art as a way to make communities feel more at ease about having a local dispensary. In the case of the California dispensary that offers its walls to local artists, a gallery opening could bring people inside who might not have otherwise come. “I think it creates brand loyalty,” she says.