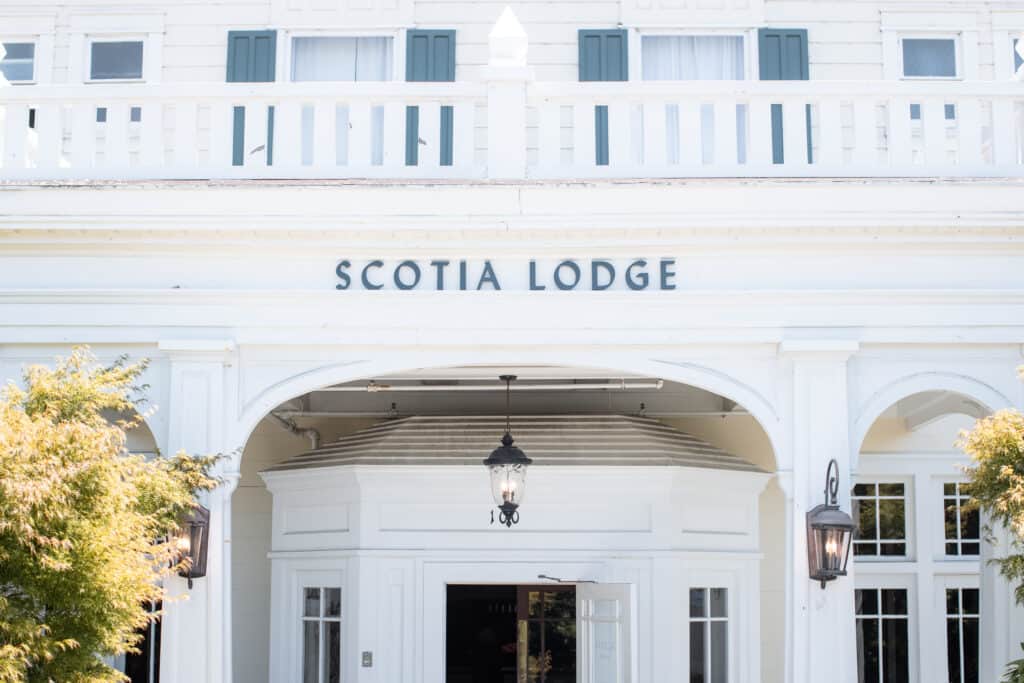 Scotia Lodge: A win for cannabis tourism in Humboldt County

For decades, Humboldt weed has had a magnetic pull, attracting people from around the world. But until recently, those people were itinerant trimmers or growers hoping to cash in on the green rush. Now we’re starting to see a new kind of visitor: tourists who want to experience some of the best weed on earth, which happens to grow in one of the most beautiful places on earth. And Humboldt Social is here to facilitate that.

The Humboldt-based hospitality group works to create spaces where tourists can comfortably access the county’s famous weed. Co-Founders Amy and Jon O’Connor now preside over a portfolio of cannabis-friendly restaurants and hotels, as well as actual consumption lounges. Their most recent project is the renovation of the 100-year-old Scotia Lodge, which is located near the northern entrance of Avenue of the Giants, at Humboldt Redwoods State Park.

The building has a rich history. Built in 1923, The Mowatoc Hotel was likened to a small-scale version of “the grand resort hotels of the national parks” and served as a stagecoach stop between the Bay Area and Eureka. The hotel later became known as the Scotia Inn, and remained a centerpiece of the region, hosting guests from all over the world. Eventually the property fell on hard times and closed its doors in 2018. Humboldt Social purchased the Scotia Inn in early 2021 and has restored the space while preserving its historic integrity, including Craftsman-era woodwork and clawfoot tubs. But perhaps most notably: The hotel concept is built around the most famous factor of Humboldt County history.

“We’ve created a setting that celebrates the culture and community of Humboldt County and embraces lawful, responsible cannabis use by adults in a setting where they can relax, eat and socialize with friends and family,” said Aaron Sweat, co-founder of Humboldt Social. “We embrace our surroundings as they embrace us. Humboldt has more cannabis farms than anywhere else in the world, and we want to share that with our guests.”

The idea resonates with some local farmers. “We are thrilled for the opening of Scotia Lodge as it provides a rich and immersive hospitality option here in Humboldt, allowing us to connect our rural location and farms with cannabis tourists,” said Andelain Roy, owner and cultivator of DewPoint, a legacy cannabis farm in Southern Humboldt. “Our farms are a main economic driver of our region, and Scotia Lodge will provide a way to seamlessly integrate our livelihood and culture into the everyday experiences for visitors.”

Scotia Lodge will be joining Humboldt Social’s other hospitality and cannabis ventures, including the newly opened Papa & Barkley Social (with separate legal ownership), which includes a dispensary, “cannabis day spa,” food truck restaurant, and outdoor smoking lounge. Inspired by the success of the Papa & Barkley location, Humboldt Social will soon be adding outdoor smoking areas to all of its locations.

“Humboldt County hotels need to create spaces for visitors to smoke cannabis. Imagine if Napa Valley didn’t offer safe places to drink wine! We are committed to taking care of our guests by offering them a legal space to consume cannabis while visiting,” explained co-founder Amy O’Connor. “For us, normalizing cannabis in hospitality means adding hospitality assets (e.g food and drink, spa, retail) to cannabis businesses and adding access to cannabis to hospitality locations, like easy third-party delivery options and outdoor smoking areas.”