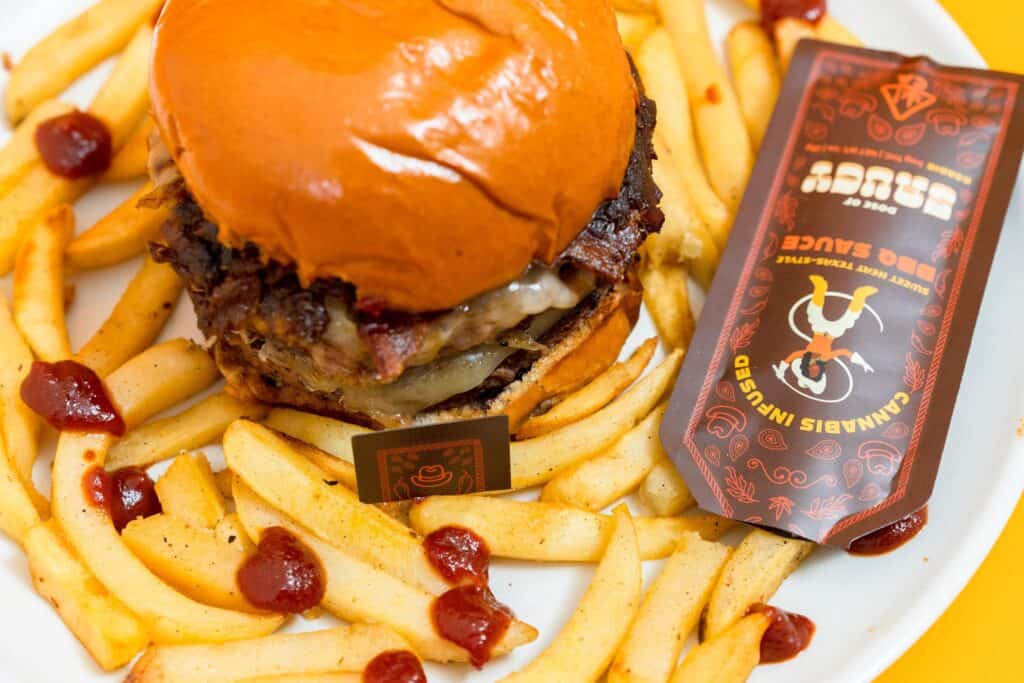 Living as we do in the golden age of edibles, it is surprising to find that the savory realm remains largely unexplored territory. Enter Dose of Saucy, whose infused sauces and dressings can elevate an ordinary meal. Though the sauces, made with vegan and plant-based ingredients, are delicious in their own right, they also provide a rare opportunity to separate sugar and cannabis. As founder Tess Taylor says, “It’s important to have a healthy vehicle for edible cannabis. Most of our edible options are some kind of sugary candy, so it’s nice—especially if you have diabetes or underlying health conditions—to be intentional in that way.”

If Taylor is a particularly health-conscious cannabis user, it’s only partly on her own behalf. A competitive athlete from a young age, Taylor’s high-achieving mentality took her to law school at only 20 years old. Early on she began using cannabis to ground herself. But it was when she started bringing THC medicine to her parents that she really saw what the plant could do. “When Colorado legalized, I started bringing products back to my parents, who were both military veterans,” she says. “My dad was on a bunch of prescriptions—after 10 major surgeries, he was being prescribed morphine tablets daily.” To test the waters, she started bringing them topicals for daily aches and pains, but before long they were happily consuming edibles.

Taylor was elated to see the difference cannabis made throughout her family, from her father to her four siblings. “Considering my parents are vets, there is a very structured, law-abiding dynamic in the family,” she says. “It’s been really awesome to see that they’re no longer going to pharmaceuticals first and foremost.” Her experience on the homefront made Taylor determined to get involved in the industry and see how to scale up her impact. “I was looking for that intersection where I could normalize and destigmatize the plant,” says Taylor. “As a queer woman of color, intersectionality is a big part of my life.”

She learned the ropes by starting with CBD. In 2019 she launched a CBD skincare line out of Dallas, where Taylor was living at the time, called Taylor + tess. The brand took off right away. “We got a lot of great press and a lot of support,” she says, noting the fateful timing of launching a Black-owned brand during the nationwide protests in 2020. Convinced that the time was right to go THC, she plotted her move from Dallas to Los Angeles. “I always knew I wanted to be in THC because that’s the cannabinoid that brought my family the most healing.”

“During the quarantine, I was coming out to L.A. almost every month, and I started thinking about how to move out here,” she says. To catch herself up to speed, she did an accelerated business program created to level the playing field for BIPOC brands. “It was designed to teach you about the supply chain,” she says. “Throughout the program, they’d have workshops with some of the top companies and individuals in their fields of expertise, all across the country.” Armed with all the right information, she was ready to launch her California cannabis brand.

But that didn’t mean Taylor was leaving Texas entirely behind. Dose of Saucy combines all the flavor of the South with the all-natural California way. “Our Sweet Heat BBQ sauce and Mama T’s hot sauce are all Texas,” says Taylor. Their Herbal Vinaigrette draws more inspiration from her new home on the West Coast, and all the ingredients are nutritious enough to pass any inspection from California’s self-appointed wellness authorities. “We use nothing but wholesome good ingredients, nothing you can’t pronounce, no harsh chemicals,” she says, noting that nanoemulsion technology means the high hits in about eight minutes, or about when the meal is finished. Of course, providing such delicious sauces can be dangerous when they come loaded—precise dosage is an important part of the product. Each sauce comes in one of two individual packages; the smaller one has 5 milligrams and the larger one has 25. For those who love the flavor but hesitate to pile THC onto their burger, Taylor intends to start selling the uninfused versions soon.

One of the fringe benefits of entering the cannabis industry has been the community Taylor has encountered along the way. “I didn’t expect events to be part of our business model,” she says. “I started with low budget dinners in my backyard last summer, including different professionals in the industry, and it became a way to connect with people sitting at the dinner table.” Taylor has hosted dinner parties, movie nights, and even professional gamers—as she puts it, “Weed and video games go hand in hand.” During the holidays she hosted a dinner for which she hired BIPOC non-male chefs, who served Thanksgiving foods that drew from their own culinary traditions.

Moments like those remind Taylor why she started Dose of Saucy in the first place. “I want it to be cross-generational and discreet enough to appeal to people like my parents,” she says. “So many important conversations happen at the dinner table amongst loved ones.” If this was true before Taylor came on the scene, it will be that much more so for the dinner parties that benefit from Dose of Saucy’s signature kick.

PrevPreviousArt savvy? The 1937 Group hosts competition for new product packaging
NextHow budtending almost got me killed and why we need to pass the damn SAFE Banking Act alreadyNext